The society Legion of Mary was founded by Frank Duff in Dublin on September 7th , 1921. It has currently over 3 million members in all dioceses throughout the world. It is the largest apostolic organisation of lay people in the Catholic Church,. The smallest branch of a Legion is known as a Praesidium and it is placed at the service of the parish priest.

As a lay apostolic organisation , Legionaries perform their duties spiritually united with the Blessed Virgin Mary , the Mother of Christ. Just as Mary loved Christ and co-operated fully in Christ's sacrifice on behalf of suffering humanity , Legionaries are called to be saints using the various merciful works done in the parish for spiritual development of its members. By uniting themselves to the Blessed Virgin Mary , they advance the reign of Christ by showing love for humanity for whom Christ suffered onto the Cross.

The Church has greatly recognised the work of the Legion . In 1965 , Pope Paul VI invited its founder , Frank Duff to attend the Second Vatican Council as a lay observer. In all archdioceses throughout the world , the Legion has been recognised and members have been a great support to dioceses and parishes.

The Legion of Mary has been in existence in the Church of The Transfiguration  without interruption since 1976 and has held nearly two thousand weekly meetings ever since. It has worked closely with all parish priests , helping in such parish activities like preparations for Mass , visiting the sick and devotional work .Members visit care homes , hospitals , the sick and the housebound and lapsed Catholics, sometimes giving them newsletters and Miraculous Medals. In some cases , they give the Holy Communion to sick parishioners who cannot come to church. Some members also help the parish priest in parish work such as preparing the altar for Mass , leading the morning rosary and leading devotions in the church. 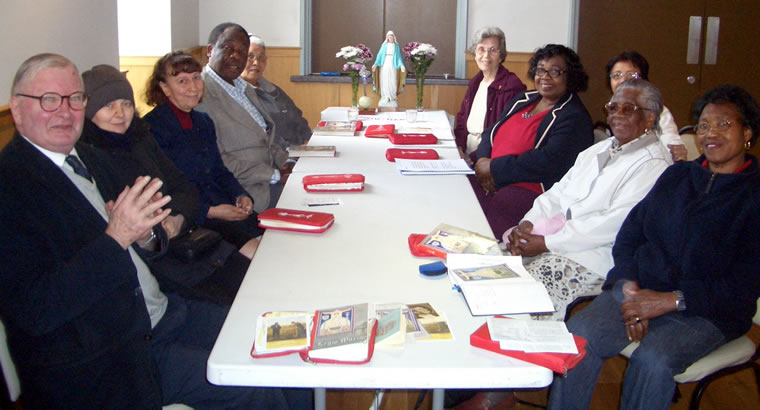 As members of the Legion of Mary, parishioners will have the opportunity to join Legionaries from other churches in annual retreats , pilgrimages , summer outings and end of year celebrations.

Meetings of the Legion of Mary:

Saturdays : 10:30 am – 11:30 am
Venue: Blessed Newman Hall
Parishioners are welcome to drop in at any meeting to say the rosary and leave.

The executive members of the Praesidium are the following :